Sharp objects play an essential supporting role in most horror films, especially when it comes to the first kill.  Listed chronologically, I’ve rounded up 10 of my favourite first kill movie scenes involving a sharp object; whether it’s a knife, a pair of scissors, or a once bitten lollipop, the end result is always the same: deadly and memorable.  Which scene on my list is your favourite classic cut?

The mother of all death-by-stabbing scenes is Alfred Hitchcock’s classic Psycho, featuring Anthony Perkins in a career defining role as Norman Bates and original scream queen Janet Leigh in an Oscar-nominated performance as Marion Crane.  The famous shower scene is poetry-in-motion perfection, from the setting to the direction, cinematography, performances and Bernard Herrmann’s stunning atmospheric score.  One of the most iconic scenes in cinematic history, Psycho demonstrates that the main ingredient in scaring an audience sometimes has very little to do with bathing the screen in blood.

Arguably the best opening scene of any horror film, John Carpenter’s Halloween immediately sets the tone for the rest of the movie as a young Michael Myers butchers his sister Judith while she’s getting ready for bed following a quickie with her (sort of?) boyfriend.   The trick (and treat) here is that the audience isn’t aware of the killer’s identity, or his age, until the very end of the scene when Michael is discovered by his parents outside of their home, the young boy holding the bloody kitchen knife in his tiny hand.   And much like Psycho, aside from Carpenter’s skilled direction and lack of gore in this scene, the classic theme (composed by Carpenter) feels like an unseen character in the film, always lurking in the shadows.

Before Freddy Krueger set his sights on the teens of Elm Street, there was The Burning’s Cropsy, another vengeful burn victim determined to make those responsible for his physical appearance pay for their crimes by killing them, this time with a wickedly impressive pair of garden shears.  And while most of Cropsy’s kills take place at the nearby summer camp where he worked as the caretaker up until five years ago, when a prank went horribly wrong and left him scarred for life, his memorable first murder actually occurs in the city apartment of a prostitute who makes the fatal mistake of (a) waiting until she’s alone with Cropsy before rejecting his business, and (b) keeping a pair of scissors (each blade around 10 inches in length) within Cropsy’s reach but not her own.

Sleepaway Camp may be famous for the plot-twisted final shot of the film, but equally memorable is the shower stall killing of camp counselor Meg.  It’s not the first murder in the movie, but it is the first one involving a sharp object; that being a clearly recently sharpened hunting knife that with almost surgical precision effortlessly cuts through the plastic exterior of the stall in record time before cutting into unsuspecting Meg’s back.

Leave it to legendary writer/director Wes Craven to create a killer whose weapon of choice isn’t one knife, but four…all being used at the same time to slice a victim to death while she sleeps.  Enter the man of nobody’s dreams, Freddy Krueger (brought to instant horror-icon life by Robert Englund) who with his tattered fedora, vintage sweater and sharpened finger-knives is literally dressed to kill.   Tina’s death is taken to the next level, namely her bedroom ceiling, as Freddy toys with the tormented teen in a fatal nightmare-induced game of cat and mouse, as her boyfriend Rod (and the audience) watches in horror from the sidelines.

In Clive Barker’s Nightbreed, David Cronenberg proves that he is as much at home in front of the camera as he is behind it (when directing such horror classics such as The Fly).  Cronenberg’s portrayal of serial killing psychotherapist Dr. Decker is beyond chilling, as revealed with his first murders of the film, that of husband and wife Melissa and Lou Rickman, and presumably their young son, too.  Dr. Decker is definitely one doctor you don’t want to be asking to make a late-at-night house call.

Although not released until 1996, Wes Craven’s Scream is probably the defining horror movie of that decade, and marked the beginning of one of the most consistently entertaining franchises in the history of horror films.  A blood-soaked love letter to fans of the genre, Scream grabs its audience by the throat right out of the gate with its opening scene featuring an amazing albeit short-lived performance by Drew Barrymore as Casey, the doomed first victim of the killer in the Ghostface costume.  Much like the shower scene in Psycho and Michael Myer’s first kill in the original Halloween, Casey’s brutal and violent murder in Scream is a classic within a classic.

Trick ‘r Treat is as much a mystery as it is a horror, if only in the sense that it’s a total mystery to me that the cult classic anthology horror film’s theatrical release was limited to the festival circuit back in 2007 before being released on home media in 2009.  It’s a hugely satisfying horror film that should have been a big hit at the box office.  It also serves as an unwelcome reminder that deadly things sometimes come in small (lollipop-as-a-weapon carrying) packages, in this case the character known as Sam (“Samhain”), who takes his rules of Halloween VERY seriously.  Emma discovers that the hard and bloody way in the opening scene of the movie, when she inadvertently breaks a couple of Sam’s rules and pays for it with her life.

With its worldwide distribution rights acquired by Netflix before its premiere at SXSW, Hush was robbed of a theatrical release, which is seriously unfortunate.  The intense film about a female author named Maddie living an isolated life in the woods who is targeted by a masked killer may sound like a movie that you’ve seen a dozen times before, but what makes Hush a true original (and a classic) is the fact that the author can neither hear nor speak.  The unforgettable first kill of the movie is of Maddie’s friend Sarah, attacked and then mercilessly killed after being chased to Maddie’s front door, her screams and banging going unheard by Maddie, who is oblivious to the fact that Sarah is being stabbed to death on the other side of the door. 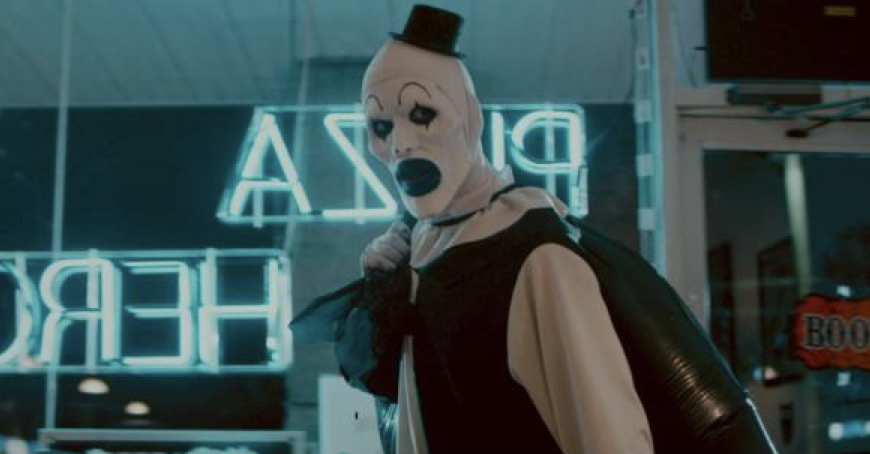 Art the Clown makes Pennywise look like Ronald MacDonald.  (Compare the low-budget and aptly titled Terrifier to either of the blockbuster IT films and you’ll know what I mean.)  The only thing worse than a creepy stalker on Halloween night is one dressed as a clown with really bad teeth and a seemingly insatiable appetite for torturing and killing people.  Art’s first onscreen kill in Terrifier, that of pizzeria worker Ramone, is relatively tame (a meat cleaver to the hand followed repeatedly by a knife to the head) when compared to what the audience and his victims will eventually discover Art is viciously capable of, which is why the scene is so effective.  This is one clown who actually wants to be taken seriously, even if it kills you. 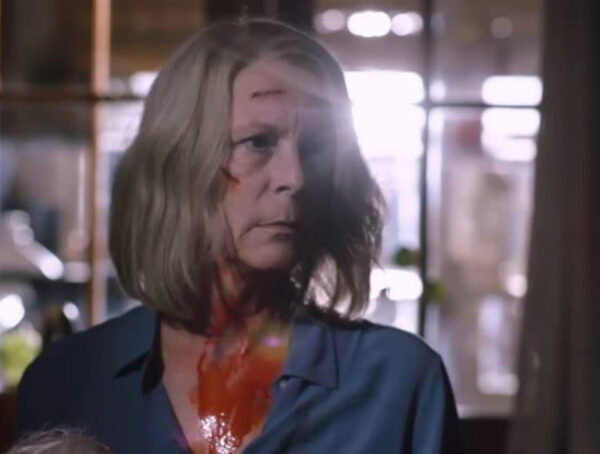 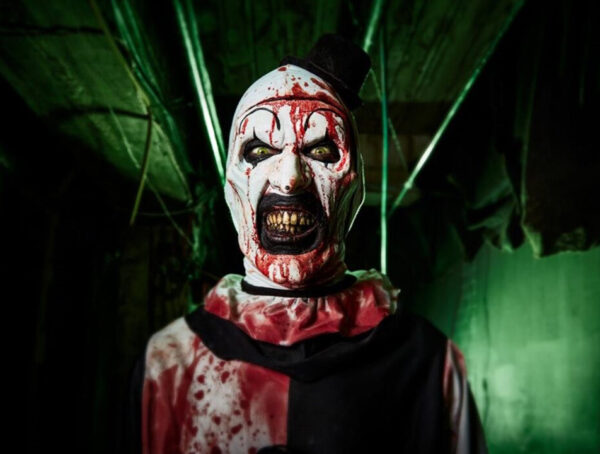