These are the names of women that frequent countdowns of the best final girls to ever grace our screens. Much like their evil adversaries, they have become mascots of their series and are widely recognized and praised among diehard fans.

The final girl is a trope in the horror genre, referring to the last [female] member of a group, surviving to confront the killer. This usually results in her defeating the villain or at the least narrowly escaping the killing spree. Many times these women are seen as pure and innocent, refusing to engage in activities such as sex, drugs and partying.

There’s no doubt these women deserve the highest of accolades, but what about those who aren’t lucky enough to make it out alive? Are they getting the recognition they deserve? Unlike other genres, the opening sequence in horror is often as riveting as the climax. That first death scene is used to capture our attention and keep us invested throughout. The women who succumb to the murderous slashers we love to hate (or in some cases just love) have an equally important role in keeping audiences engaged.

They may not be final girls, but these scream queens nonetheless deliver some serious acting chops. Here’s a list of 10 impressive “beginning girls”. 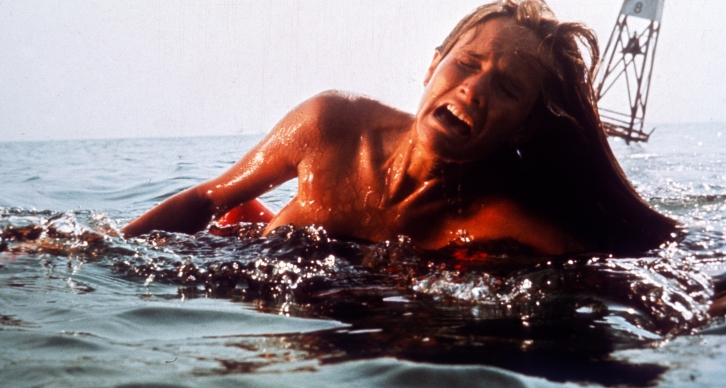 Steven Spielberg’s Jaws has one of the most memorable opening scenes in the history of cinema. This, in part, is thanks to an outstanding performance by actress and stuntwoman Susan Backlinie, who brings the character of Chrissie Watkins to life (and death). Chrissie leaves a beach party at night to go for a swim and soon is jerked around from side to side in terror before eventually being pulled underwater by the great white shark. Jaws is considered the first ever “blockbuster” and this famous opening scene most definitely played a role in the success of the film. 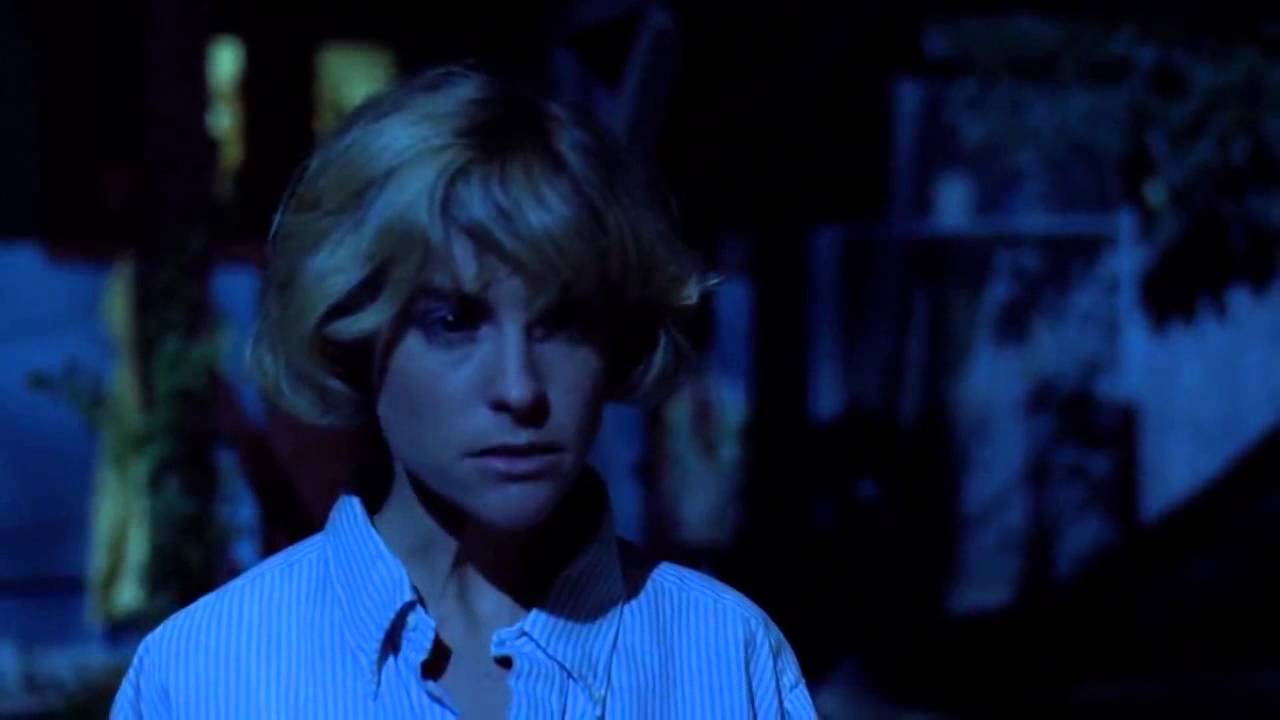 Wes Craven’s A Nightmare on Elm Street has many standout death sequences, but Tina’s bedroom death scene still leaves audiences terrified to this day. Freddy has no mercy as he lifts and drags her up the wall to the ceiling, throwing her around before slashing her chest multiple times with his finger-knives. There have been many Elm Street sequels but that very first kill is still the most disturbing. 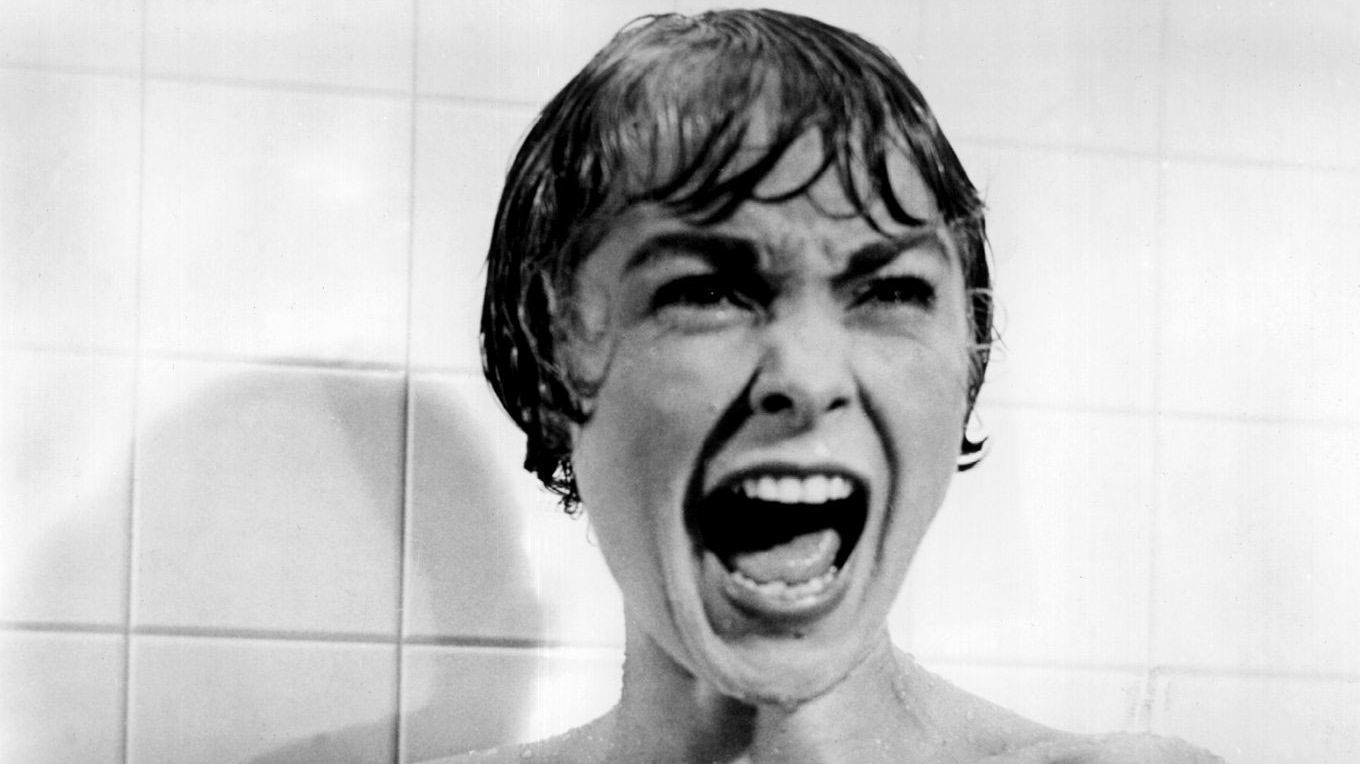 While her daughter, Jamie Lee Curtis, is known for being the ultimate final girl, Janet Leigh is the original beginning girl, courtesy of her character’s infamous murder in Alfred Hitchcock’s Psycho. Marion Crane is killed 47 minutes into the film in a hair-raising 45-second shower scene that left audiences stunned. This was unexpected; up to that point Janet Leigh had only starred in musicals and romantic comedies, and before Psycho the leading lady in a film was never killed before the halfway point. Today, Psycho is still considered one of the best films of all time and an early example of the slasher film. 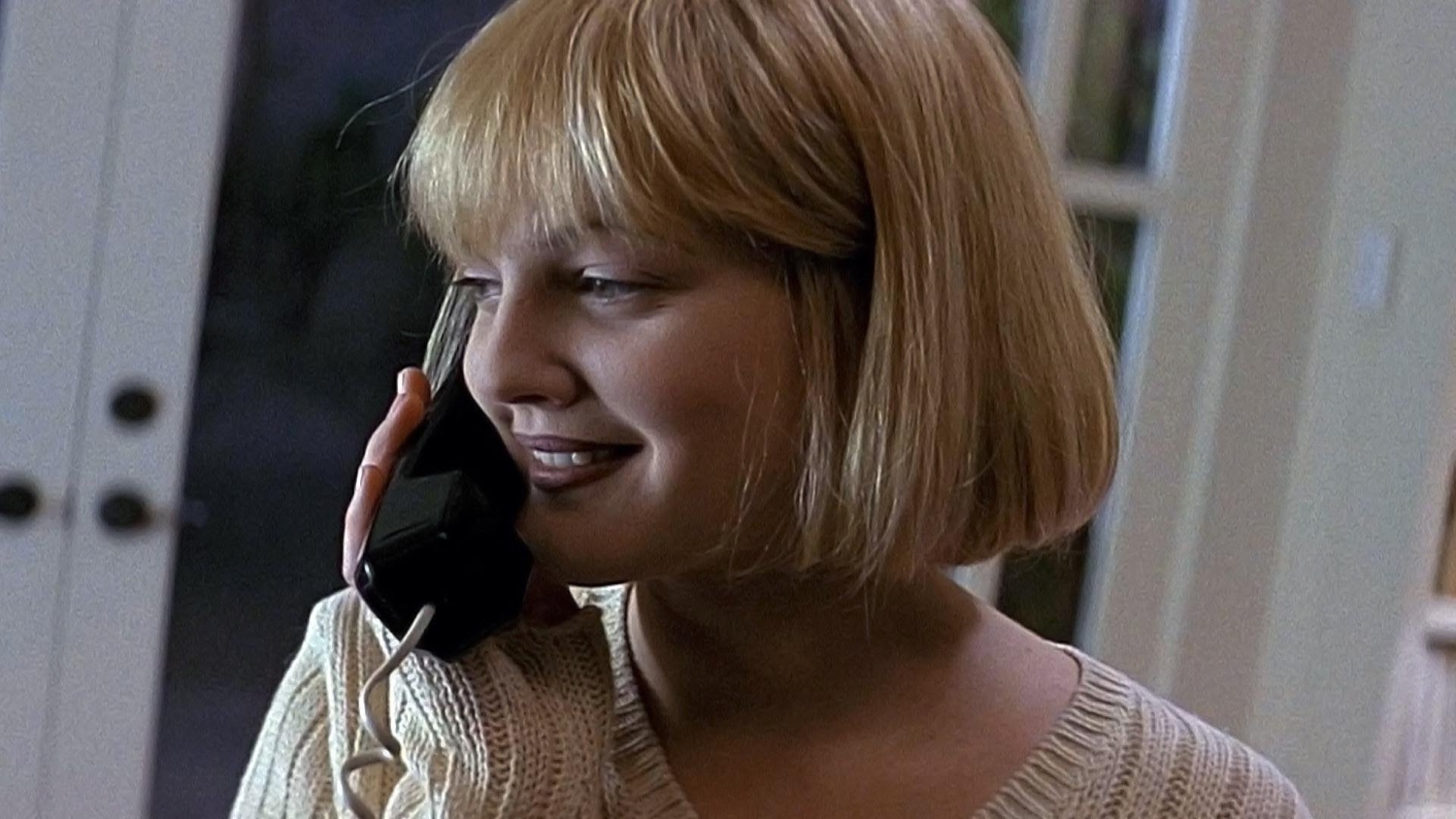 The slasher genre was revived with Wes Craven’s comeback film, Scream. Killing the film’s biggest star within the first 15 minutes was reminiscent of Janet Leigh’s death in Psycho. Drew Barrymore played teenage Casey Becker, who just wanted to watch some scary movies in the comfort of her home, but instead ends up getting gutted and hanged from a tree after a vicious game of cat and mouse. Alicia Silverstone was initially set to play the role of Casey, while Drew Barrymore had signed on to play the lead – Sidney Prescott. Barrymore later requested to play the role of Casey in order to shock audiences with such an unexpected opening; and a scene that gave the genre one of its most famous lines: “What’s your favourite scary movie?”. 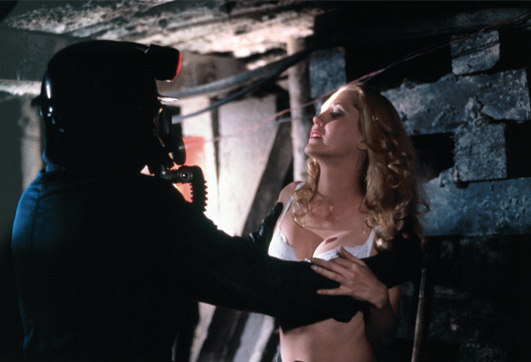 The opening sequence in My Bloody Valentine happens so quickly that the beginning girl, played by Pat Hemingway, wasn’t even given a name. But sometimes quick is effective in horror. The woman is impaled through the back by a pickaxe in this surprise first scene; which proved filmmakers were ready to kick it into gear right away. This memorable scene may be partly why Quentin Tarantino considers My Bloody Valentine his favourite slasher flick.

Though not one of the most memorable of the beginning girls on the list, Lisa Smith’s death in the sequel to 1998’s Urban Legend is enough to make jaws drops. We’ve included her on the list instead of Natasha Gregson Wagner from the original because not only is Lisa decapitated, she first gets her kidney removed, skin torn, hands cut by fibre wire and is nearly attacked by a hungry dog. Definitely one of the standout scenes in this cheesy but fun sequel. 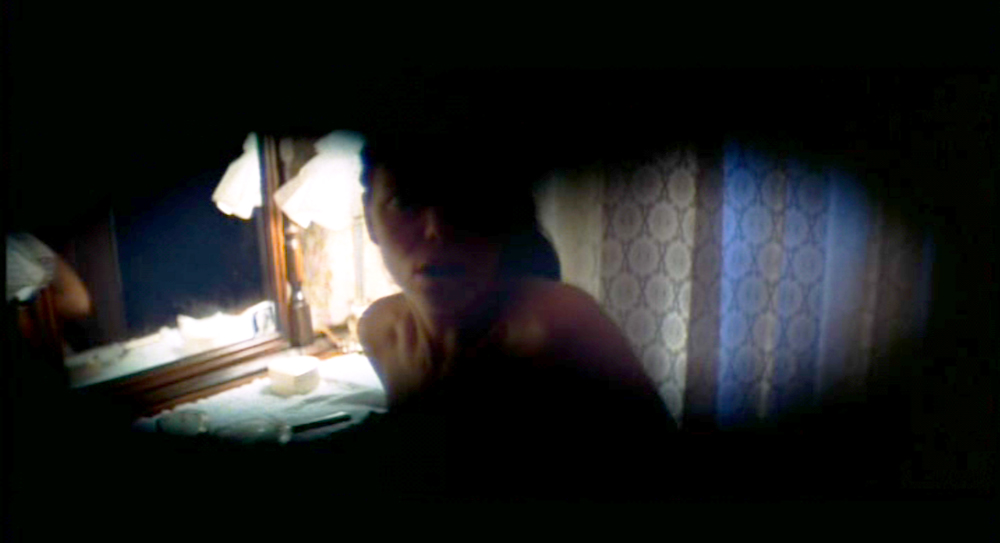 John Carpenter’s opening sequence in 1978’s Halloween took 8 hours to shoot and was filmed in one long shot to keep audiences on edge. This was a unique opening because it was from 6-year-old Michael’s point of view, and when we see him grab a butcher knife and put on the clown mask, the suspense shoots through the roof. Michael slowly wanders up the stairs and into his sister Judith’s bedroom, where he begins stabbing her in the chest repeatedly with the knife. Sandy Johnson only appears on screen as the defenceless, vulnerable Judith for about a minute total, but will forever be an integral part of the Halloween series.

Alice Hardy made for a marvellously strong final girl in 1980’s summer camp slasher, Friday the 13th. During the climax of the film, she murders Pamela Voorhees by decapitating her with a machete. In the 1981 sequel, she proves to be no match for Jason when she is the first to be killed in an abrupt and stunning scene. Alice goes from final girl to beginning girl after being stabbed in the head with an ice pick by the notorious killing machine. This same recipe was used with Halloween 4‘s leading lady Rachel, who quickly dies at the hands of Michael Myers in Halloween 5. 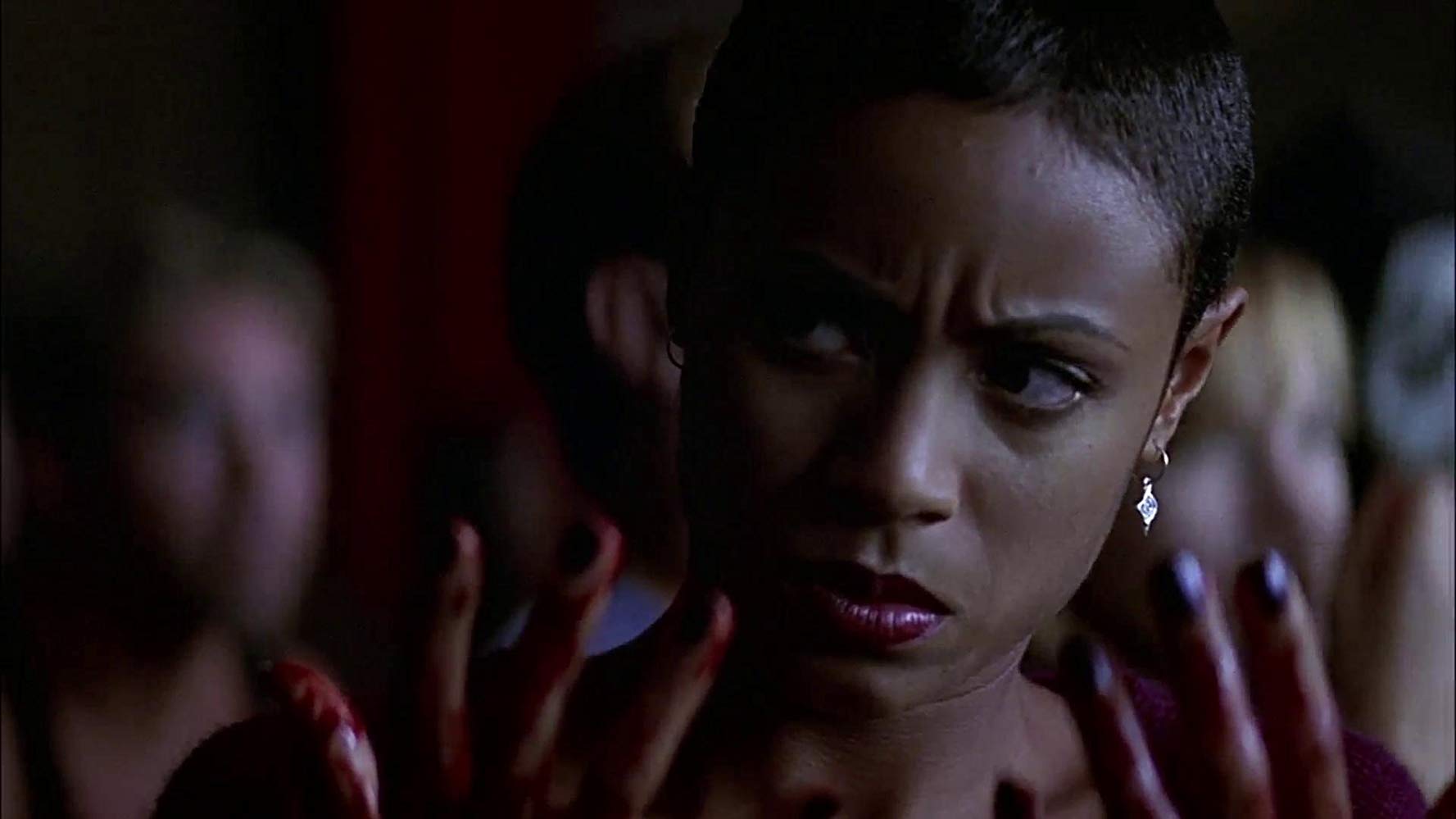 Scream 2‘s opening sequence had a lot to live up to after the rave reviews of its predecessor. Jada Pinkett Smith’s character gets to relive the opening of Scream while going to see a movie, Stab, which depicts the horrid events. This scene is unique as typically the killer hunts his victims while they are alone. Here, Ghostface goes after Maureen in a packed movie theatre filled with horror fans sporting the same mask. Jada made a request to the director during the filming of Scream 2: “I want to die the most horrific death that has ever happened in a horror film. I want it to be long and excruciating”. Thankfully for the fans, Wes Craven was cool with delivering an even more gruesome opening in his Scream sequel. 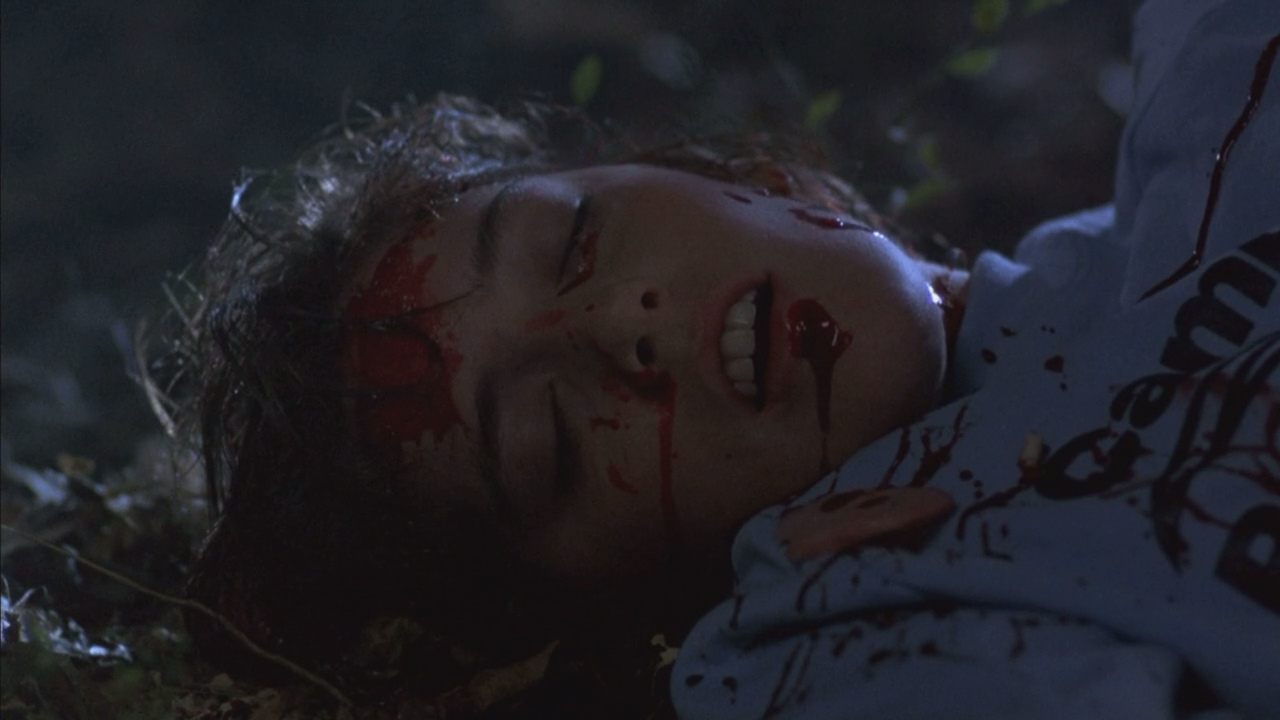 Finally, we have Phoebe’s death scene in the sequel to Sleepaway Camp. Phoebe’s role is important as she tells fellow campers the tale of the previous film’s murders at Camp Arawak. Cue deadly head counselor Angela, who believes Phoebe should be punished for breaking curfew, arguing and disobeying her…oh, and of course, because of Phoebe’s filthy mouth. Soon Phoebe is bludgeoned to death with a log before having her tongue cut out. This scene puts the “camp” in Sleepaway Camp.

179
Stories
No Safety in Numbers in Horror

FROM HORROR TO OSCAR – PART 2

In the summer of 2019, I shared a list of 11 film celebrities with early roles in horror who would …