“Oh really? What day is that John?”

August 5th, 1998, the day Laurie Strode finally returned and the day that gave me LIFE! Though it’s received mixed reviews, Halloween H20 remains my favourite sequel of the 11 (soon to be 13!) in the series and holds a special place in my heart. I was just getting into scary movies around the time of its release and it was one of the first horrors I saw, after Halloween and Scream. It’s essentially what caused my obsession with Jamie Lee Curtis and my rabbit friends can thank the film for hours, days, years of having to listen to me idolize the original Scream Queen.

Still, to this day, when I see the movie poster, a flutter of excitement comes over me. It’s likely the film I’ve watched the most and the only film I’ve never NOT felt like watching.

To celebrate the release of Halloween H20, here are twenty things I love and one thing I hate about the film.

1/ The Return of Marion Chambers

Dr Loomis’ nurse, Marion Chambers, played by Nancy Stephens, was never a leading role in the series but she made cameo appearances in Halloween (1978) and Halloween 2 (1981). Having her reprise her role 20 years later just made it feel more like Halloween.

2/ Homage to other Horror Films

The original Halloween influenced numerous horror films and is seen by many as the blueprint of the slasher genre. Halloween H20, in turn, pays homage to similar classic like Psycho, Scream and Friday the 13th. 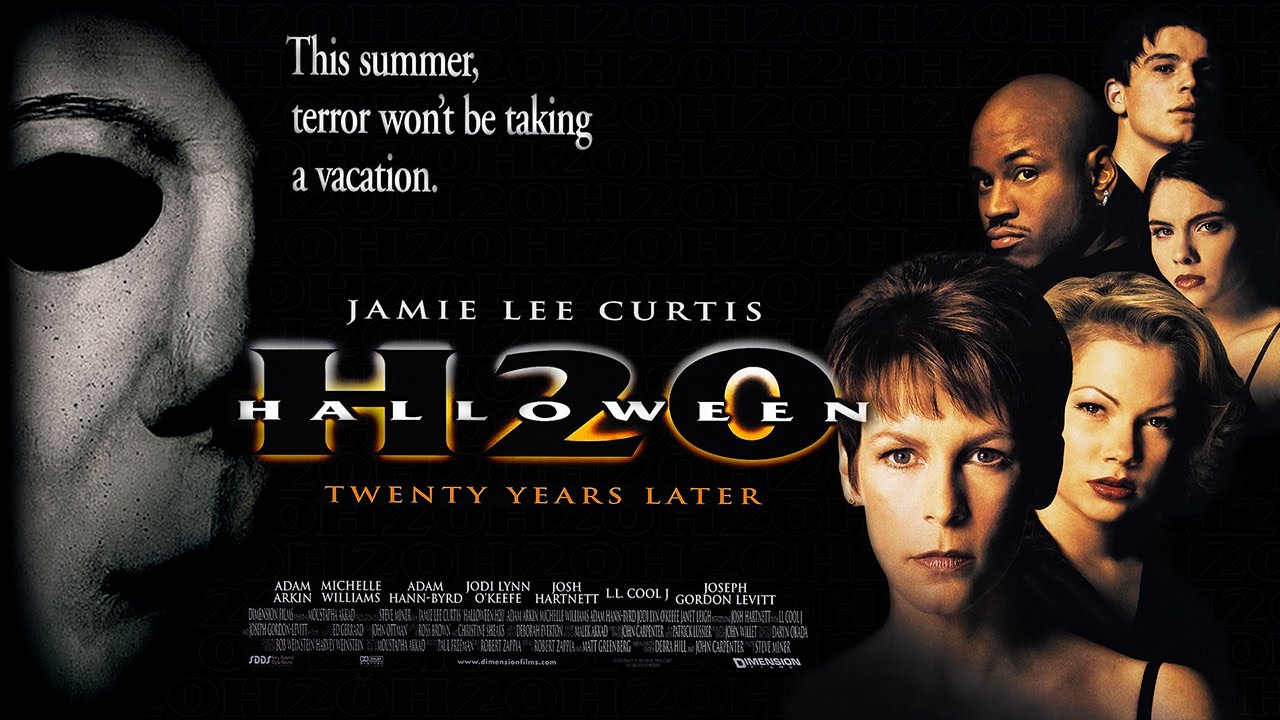 It was Scream that introduced the ‘floating head” movie poster fad in the late 90s, but H20’s poster is just as iconic. I would spend hours sketching it. And the look in JLC’s eyes? She means BUSINESS!

Of course, I was upset to see Marion killed off so soon, but the full opening sequence left a lasting impression on audiences.

Dr Sam Loomis is one of the most important elements of Halloween. Sadly, he passed three years prior to H20 while filming Halloween 6. Including his voiceover and photo during the opening sequence was tastefully done and paid proper homage to the late, great Donald Pleasence.

6/ The Title and Branding

I always thought Halloween H20: 20 Years Later was a clever title for the anniversary sequel. H20 is the chemical symbol for water which has a pH balance of 7.0. and (Halloween) H20 is the 7th film in the series. The taglines, “This summer, terror won’t be taking a vacation”, “It’s going to be one hell of a family reunion”, and “Blood is thicker than water” definitely boost excitement as well.

Laurie Strode is the most beloved character in the Halloween series but much to fans’ dismay, her storyline seemed to be over after Halloween 2. While filmmakers tried to bring in relatives audiences cared about, the storylines often fell flat and they were never as engaging as Michael vs. Laurie. It was actually Jamie Lee Curtis’ idea to do an anniversary film as a thank you note to her fans and the film that launched her career as an actor.

Not only do we get Jamie Lee Curtis in H20 but her real-life mother and star of Psycho (which influenced Halloween), also graces our screens. She plays a small role but has some amusing lines to work with including a repeat of one of Sherriff Brackett’s (Charles Cyphers) in the original, “Well it’s Halloween, I guess everyone’s entitled to one good scare.”

When introducing a younger new cast, with established actors in a series, things don’t always mesh well. While Linda, Bob and Annie are irreplaceable, the teens in H20 have great chemistry with each other and make you care about their fate. Oh, and Josh Hartnett was one of my first crushes. <3

I was very happy they included a quick flashback to the original film. And what better scene to include than the horrifying closet showdown?

LL Cool J was actually a big fan of the original Halloween, going to see it in theatres with his mom when he was just 9 years old. Unlike Busta Rhymes’ unfortunate role in Halloween Resurrection, LL Cool J added hints of comic relief as Ronny in H20. Round melon what?

Jodi Lyn O’Keefe plays a mega-bitch in She’s All That, but before this, she was murdered by Michael Myers in one of the most brutal deaths of the entire franchise. After almost losing her leg by a dumbwaiter door, she is stabbed repeatedly with a butcher knife. In fact, other than Beth in Halloween 6, Michael hadn’t got that knife happy since he was 6-years-old.

After discovering their friend Sarah hanging in a food pantry (more to #12/ above), John and Molly come face-to-face with Uncle Mikey. This leads to a tense chase scene ending in the duo being saved by none other than Laurie.

The reunion of Laurie and Michael is executed perfectly in Halloween H20. The sheer terror and shock in Laurie’s eyes when she sees her brother with only a thin door separating them is genius.

I find Laurie Strode’s story in H20 to be more believable than in 2018’s Halloween. She shows signs of PTSD but still must find a way to function in society. Laurie was a straight-A, school-focused student in the original film. It was a smart (and entertaining) choice to make her the Dean of a posh, private school and also a functioning alcoholic.

The tables finally turn when Laurie decides to stop running from Michael. Molly explains to Laurie earlier in the film why she feels Victor Frankenstein must finally confront his monster. “Victor finally had to face it. It was about redemption. It was his fate.” Such a compelling moment, my favourite in the film, when Laurie screams “Michael!” in the search for her monster. It’s very poetic.

17/ The Setting of the Climax

I don’t mind that H20 is the only instalment in the series that doesn’t take place in Haddonfield, simply because it makes sense with the plot of how Laurie goes into hiding. How fun is it to watch Laurie and Michael in a game of cat and mouse in the humongous Hillcrest Academy?

I’m always up for more Halloween films but if it had to end, this would have been a damn good conclusion. A small embrace between brother and sister right before a helpless Michael is decapitated.

Granted not as chilling as John Carpenter’s 1978 masterpiece, it does get your adrenaline going. What a powerful moment when the Halloween theme song kicks in in that final scene with a victorious yet exhausted Laurie.

There are so many Easter eggs from previous films in Halloween H20 it’s hard to spot them all. To list a few: Michael’s famous sit-up, Mr Sandman by The Chordettes playing, Molly listening to a lecture on fate and spotting Michael watching her from outside the classroom, The bloody scissors in the opening sequence that were used to kill Rachel (Halloween 5), Laurie saying “Do As I Say Now!” twice, and Michael killing Will, in the same way, he killed nurse Jill (Halloween 2).

What the fuck is up with the masks in this film? It’s such an important detail to overlook and something Halloween 2018 achieves brilliantly. In the opening scene, the mask from Halloween 6 is used which I would have been cool with, although not my favourite in the series. Two other masks are introduced in the film because the director decided far into production to go with a different look. In one scene a CGI mask is even used to replace Michael’s old mask with the new one. So many fans would have a higher appreciation for the film if they made the mask more similar to the original William Shatner version. A mess, but forgivable given the 20 points above.

What do you love and hate about Halloween H20?

FROM HORROR TO OSCAR – PART 2

In the summer of 2019, I shared a list of 11 film celebrities with early roles in horror who would …

Awesome post, couldn’t agree more! To piggyback on #9 I love the chemistry between Josh and JLC. Such a believable mother/son relationship and love the back & forth banter they have throughout the movie.
“What the F*#$ do you think you’re doing, John?!”