What Are You Running From?

Recently screened at this year’s Fantasia Film Festival, director John Hyams’ stripped-down survival flick about a vulnerable woman on the run from a deadly stalker offers high-intensity thrills and top-notch performances, making it worth the ride.

In Alone, the recently widowed Jessica (Jules Willcox) travels the desolate highways of the Pacific Northwest on the move to a fresh start. Things begin to unravel when a few tense confrontations with another traveller (Marc Menchaca) leads to her kidnapping in the wilderness. After narrowly escaping the abduction, Jessica is forced to not only battle the cold-blooded killer but also elements of Mother Nature.

John Hyams’ minimalist approach works wonders in Alone. We’re introduced to a straightforward cat-and-mouse setup packed with non-stop suspense and raw emotion; however, what makes the film so scary is how realistic the situation is. We’ve read the headlines announcing real-life kidnappings of women like Elizabeth Smart, Jaycee Lee Dugard, Amanda Berry and countless others, reinforcing the fact that this kind of thing actually happens. One minute Jessica’s on the road hitched to a U-haul packed with her belongings and the next she’s being held against her will by a predator who’s no rookie to abductions. Writer Mattias Olsson delivers a clean and nicely-paced screenplay without focusing too much on excessive backstory. Is it entirely fresh? Not quite, but still surprisingly effective. As Jessica navigates through the deep woods and fights the predator, forced to make quick and dangerous decisions, expect to be on the edge of your seat yelling at the screen and wondering what you would do if it were you. This, of course, makes for a fun viewing experience.

Alone’s cast is very small and the two lead characters are key to the film’s success. Jules Willcox is easy to connect with as Jessica, a normal young woman suffering the loss of her husband. She proves she’s a fighter in multiple scenarios, making you root for her throughout. Marc Menchaca dials up the creepiness as her abductor. His performance, though sinister, relies on realism too; an average man you could be unlucky enough to encounter on your travels. You’ll shudder in moments when he gets uncomfortably close to his victim. Both actors deliver outstanding performances, elevating this survival tale to the next level. A familiar face from the horror genre in films like The Silence of the Lambs and Deep Rising, Anthony Heald breaks up some of the tension in a small but enjoyable role.

Alone is set up in chapters with titles like “The River” and “The Rain”, an interesting approach for a film whose goal is to build a sense of suspense and dread. This effect successfully foreshadows without ruining elements of surprise. The cinematography is exceptional, guiding the viewer through the beautiful yet sometimes dangerous elements of nature. Hyams uses creative, up-close camera work to build tension and at times forces the audience to share the victim’s heart-pounding point of view. This immersive experience helps an otherwise familiar-feeling film standout.

Through its quick-paced yet grounded storyline, lean but mighty cast and innovative cinematography, Alone makes a positive case for simplistic filmmaking. Not a new concept but an emotionally gripping highway thriller that has carved out a lane of its own. 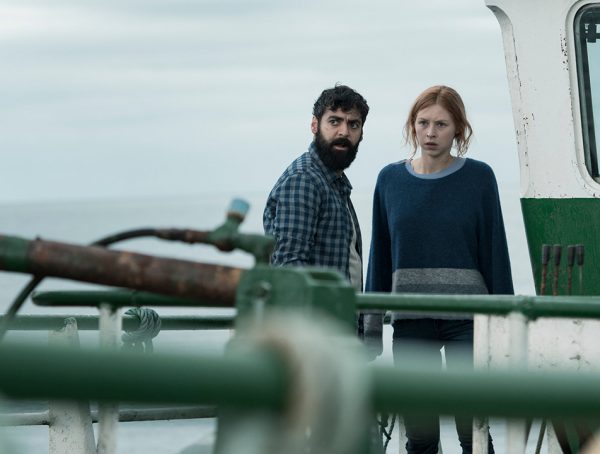