A NIGHTMARE ON ELM STREET (1984) TRICKS AND TREATS

On November 16, 1984 director Wes Craven took horror to a new level with the release of A Nightmare on Elm Street, and in doing so introduced unsuspecting movie goers to the man of nobody’s dreams, Freddy Krueger.

I love the film almost as much as I do the original Halloween. So in celebration of the classic horror’s 34th anniversary, I gave myself a sweet manicure, put on a cozy sweater, poured some vodka into a coffee mug, and returned to Elm Street for a wide-awake reunion with Freddy. In doing so, I was fondly reminded of some of the film’s tricks and treats that I’d noticed over the years, and was awakened to a couple of new observations, too. Here they are, in chronological order. 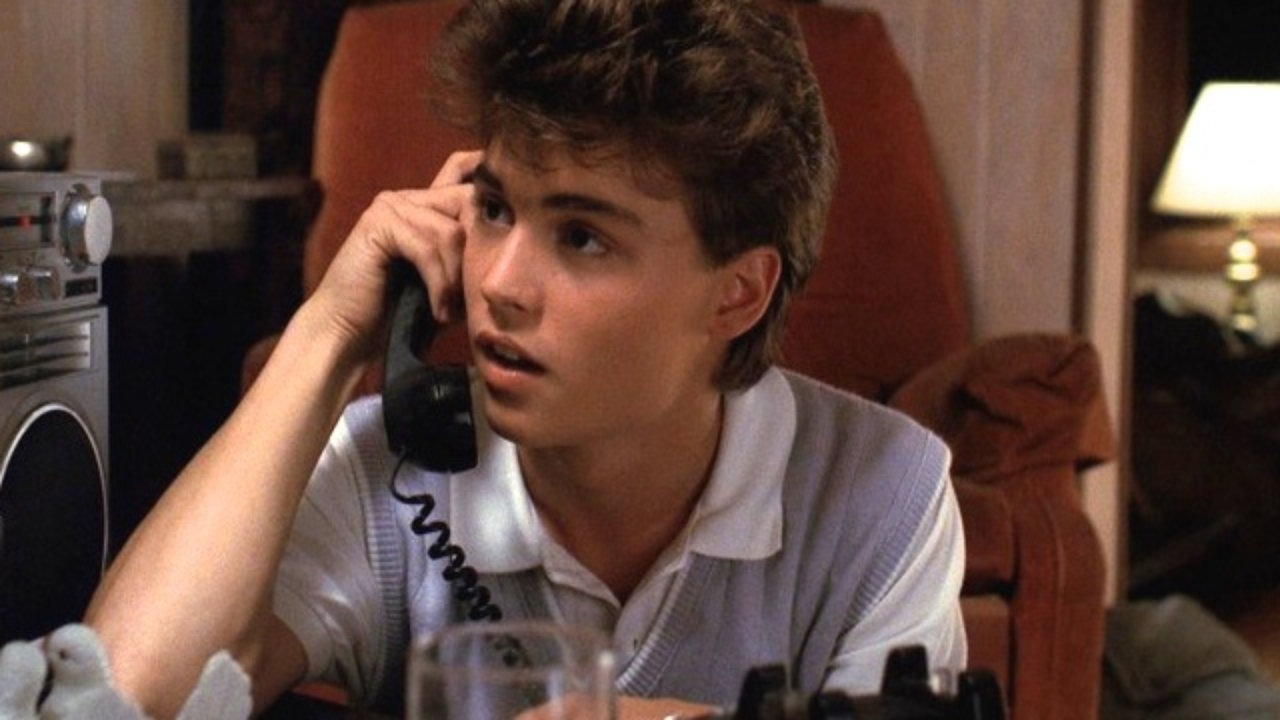 1/ I don’t remember “ghetto-blasters” / “boom-boxes” being so sophisticated in their design and operation that to locate the volume dial or the STOP button was to be asking the impossible. When Glen’s audio cassette recording of sound effects goes off the rails while he’s talking to his mother on the phone, Nancy and Tina’s awkward attempts to silence the sounds only make
sense had they been doing so blindfolded. 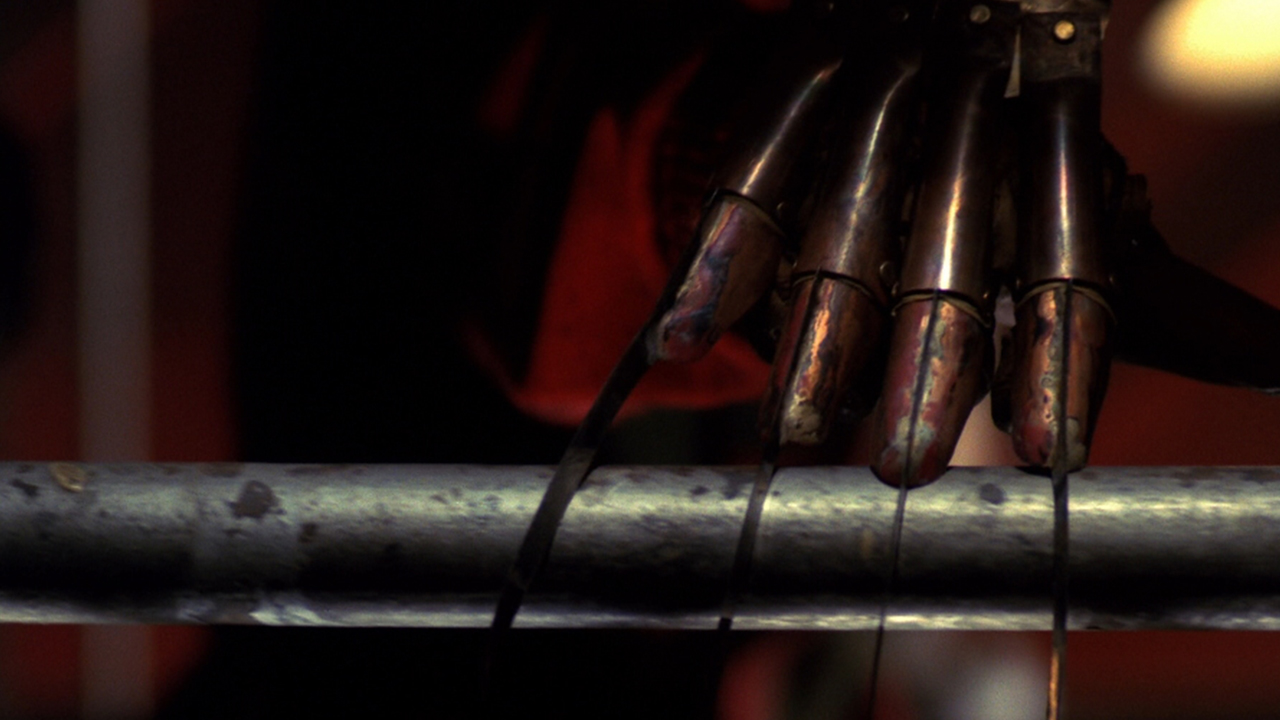 2/ Tina’s invention of the word “finger-knives” is comedy gold (unless they’re slicing into you, of course). 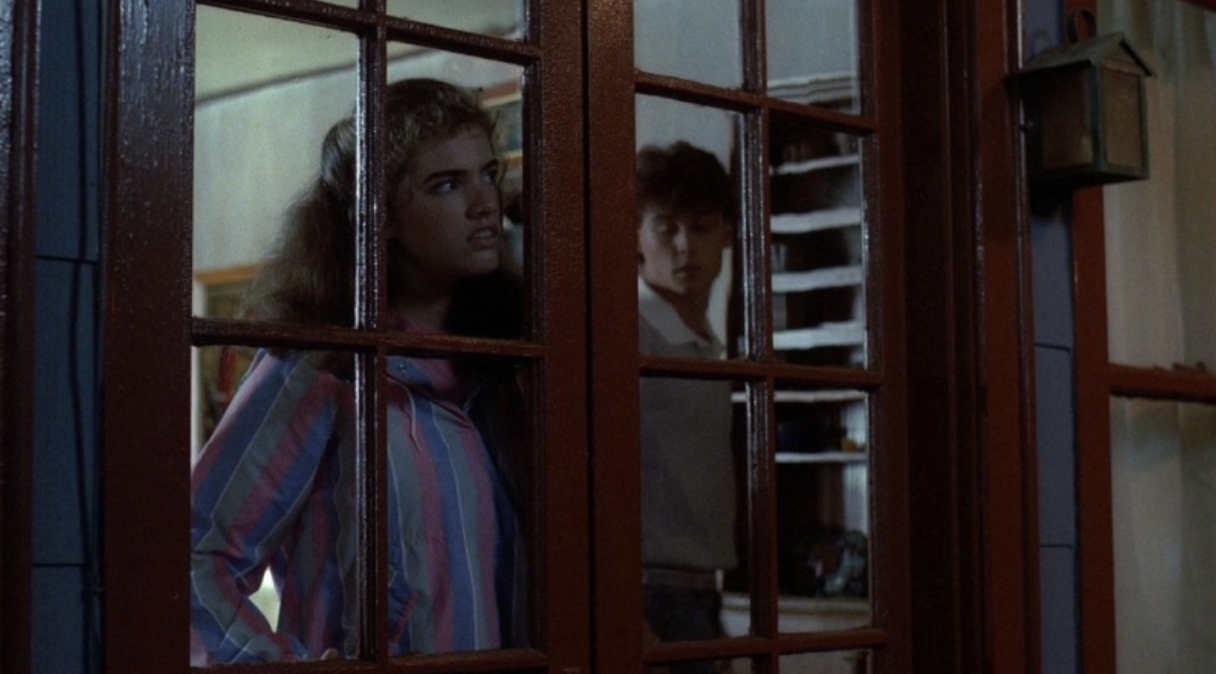 3/ At Tina’s house, the French patio doors have a chain lock on the inside. Am I the only one who thinks French doors with chain locks are kind of odd?

4/ After a very loud sex session with Tina, Rod turns over to go to sleep, grabbing a blanket to cover himself with. That blanket seems to disappear between that scene and Tina’s bedtime slaughter. 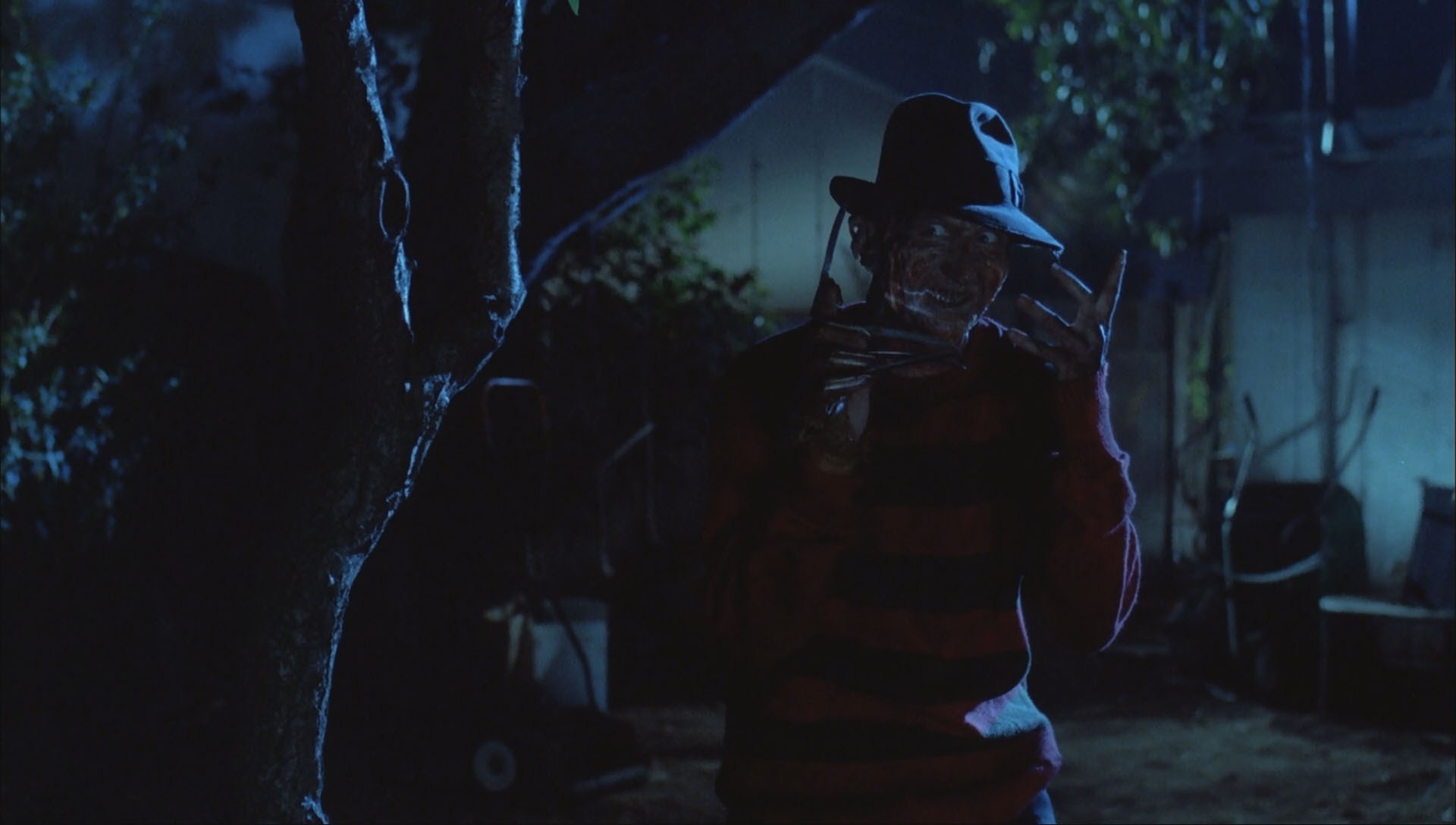 5/ For the entire movie, Freddy Krueger’s glove (finger-knives!) is located on his right hand, except for a SPLIT SECOND when, in pursuit of Tina, Krueger jumps out from behind a tree; at which point the glove is on his LEFT hand ever so briefly before it re-appears (as per the above photo) on his right as the scene cuts back from a terrified Tina to a frightful Freddy.

6/ Why does Rod exit via the bedroom window (located on the second floor of the house) instead of using one of the house’s actual doors? 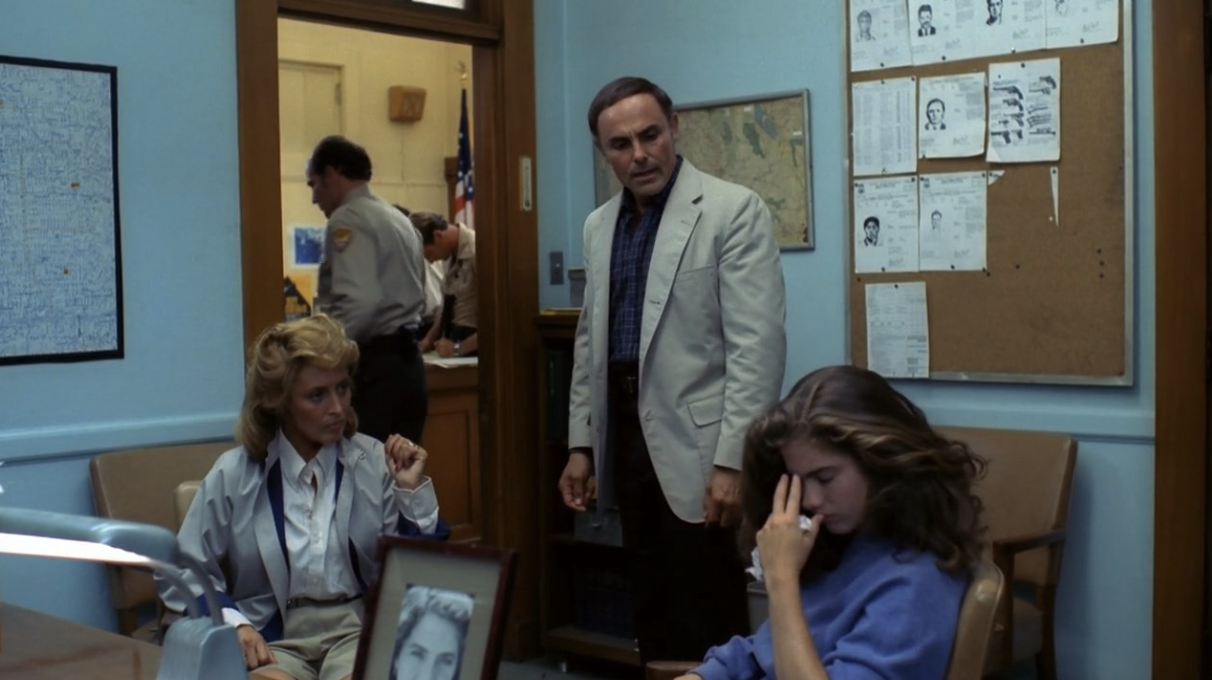 7/ In his first scene, actor John Saxon (Nancy’s father) appears to be wearing more eyeliner than his onscreen wife and daughter.

8/ When Rod is on the loose and subsequently apprehended by the police, he is shirtless (underneath his leather jacket, that is) and shoeless; however, in jail he’s seen wearing a t-shirt and some sweet brand new-looking Nike runners. 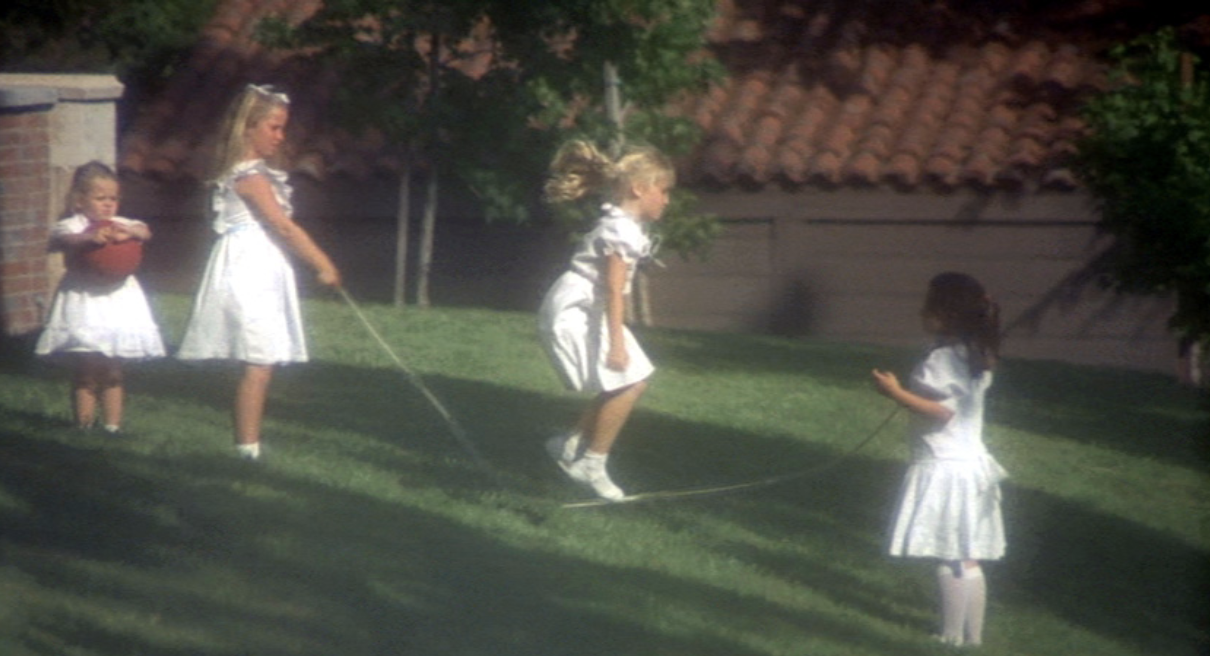 10/ For the longest time, I wondered why Nancy, while trying to enjoy some quality bath time, was suddenly singing the “One, two, Freddy’s coming for you…” theme song for no apparent reason. I only just realized that what Nancy is singing is what Tina refers to as “that old jump rope song”, a reference Tina makes earlier in the film when she’s discussing with Nancy (and Glen) the series of nightmares she’s been experiencing.

11/ Speaking of Nancy’s bath, there is a way too much steam coming from the water, especially after she removes herself from the tub….and not because the water was too hot! 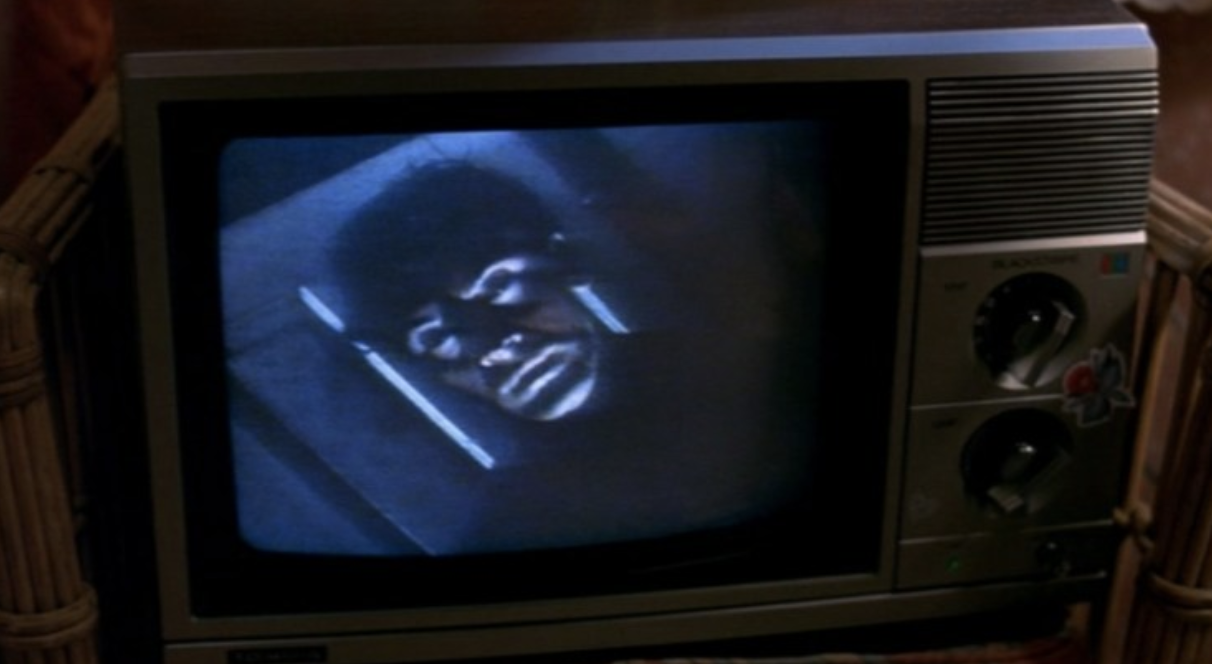 12/ OMG, Nancy is watching The Evil Dead on television in her attempts to stay awake. Oh, Ash!!!!!!

13/ “Oh god. I look 20 years old,” observes Nancy after depriving herself of sleep for days. I should be so lucky.

14/ When Freddy first chases Nancy home from the precinct, and breaks the front door window after she’s locked him out, at first he’s wearing Tina’s face over his (and sounding like her), before tearing it away to reveal (what’s left of) his own face. Why did it take me so many viewings to notice this? 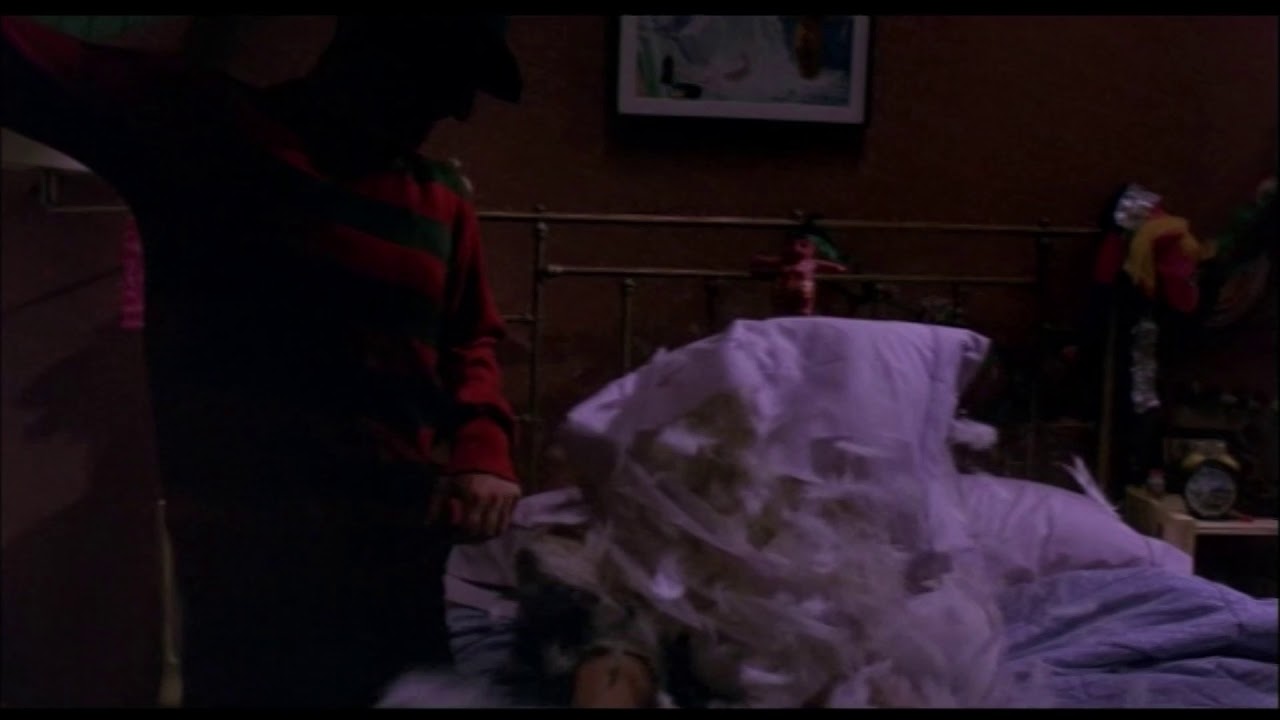 15/ When Freddy tears into Nancy’s bed pillow, the feathers of a thousand birds are released. From. One. Single. Pillow. 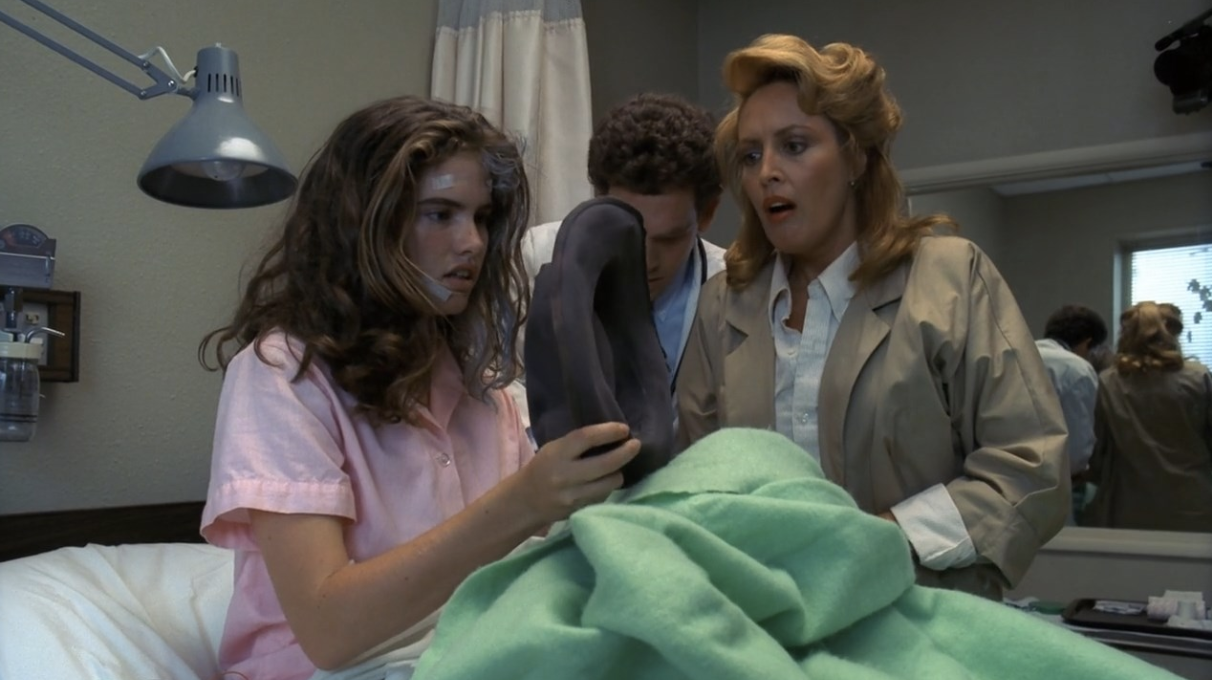 16/ Only two days after Tina’s and Rod’s murders, Nancy’s mother has booked her an appointment at the prestigious Katja Institute for the Study of Sleep Disorders. To get any kind of medical appointment THAT quickly seems to be the makings of a dream.

17/ I love that Nancy’s mother is smoking (indoors!) while observing Nancy at the Katja Institute.

18/ While having a chat with her mother in the kitchen, Nancy drinks a lot of coffee from the mug, but oddly never seems to swallow after emptying the mug of its contents. 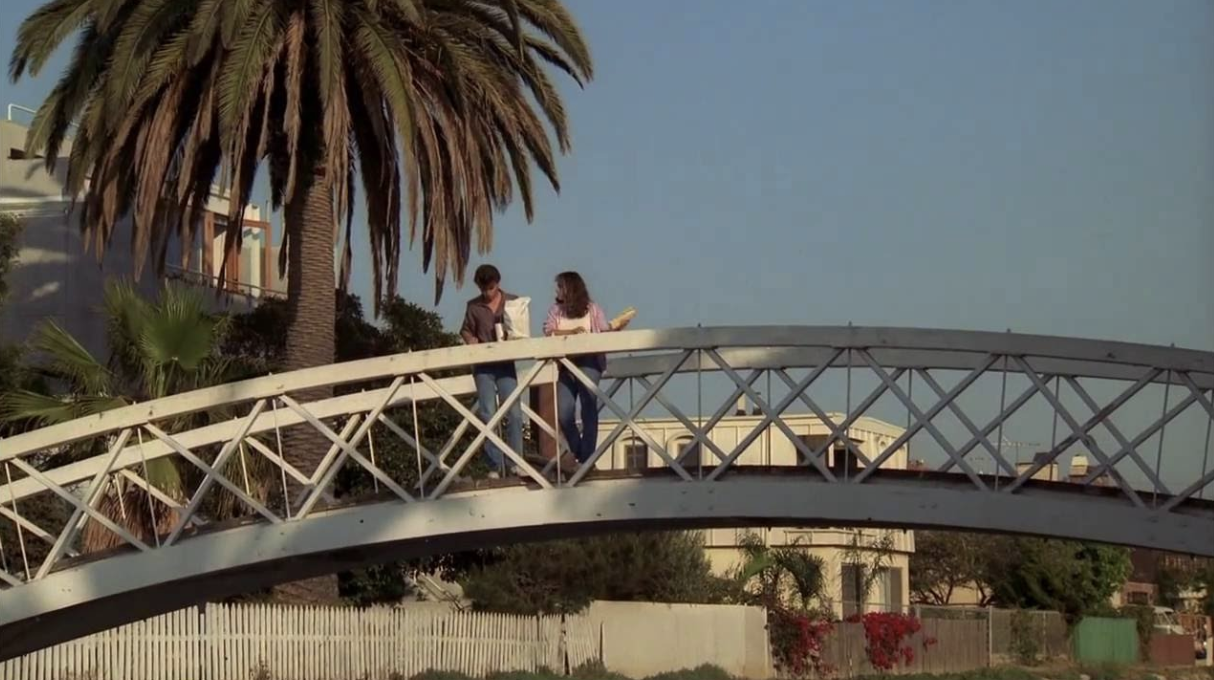 19/ I’ve read a couple of articles indicating that the setting for A Nightmare on Elm Street is supposed to be Springwood, Ohio (coincidentally, the state where its director, Wes Craven, was born); however, if that’s the case, why are there very visible palm trees in the film? 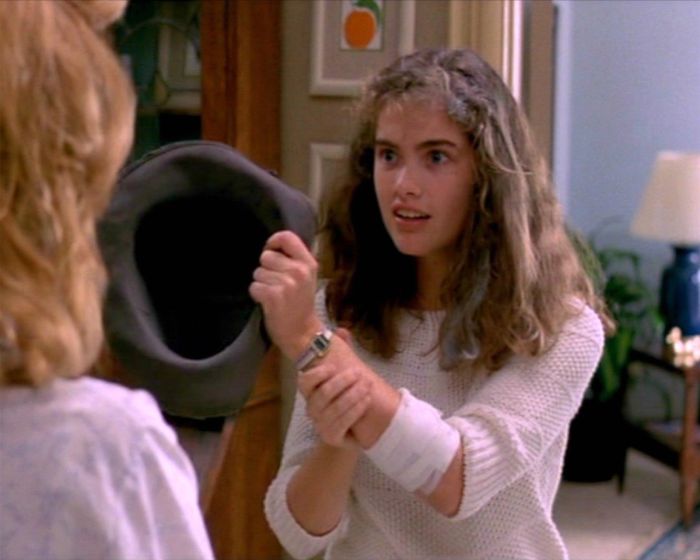 20/ Nancy’s arm wound, despite being wrapped in a bandage, is forever bleeding. 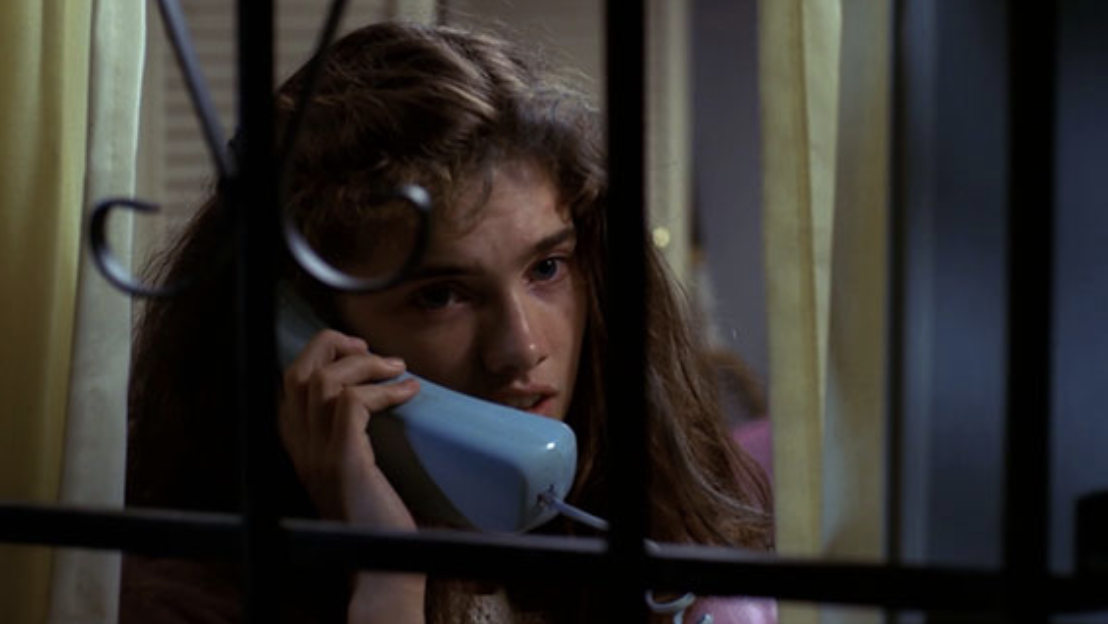 21. Glen dies at midnight. The ambulance and cops arrive and begin their investigation of the crime scene no more than 10 minutes later. (When Nancy is speaking with her father over the phone, and he’s at Glen’s house, she tells him to meet her in “exactly 20 minutes”, following it up with “That’ll be exactly half past midnight.”) Props to the Springwood police for moving like greased lightning! 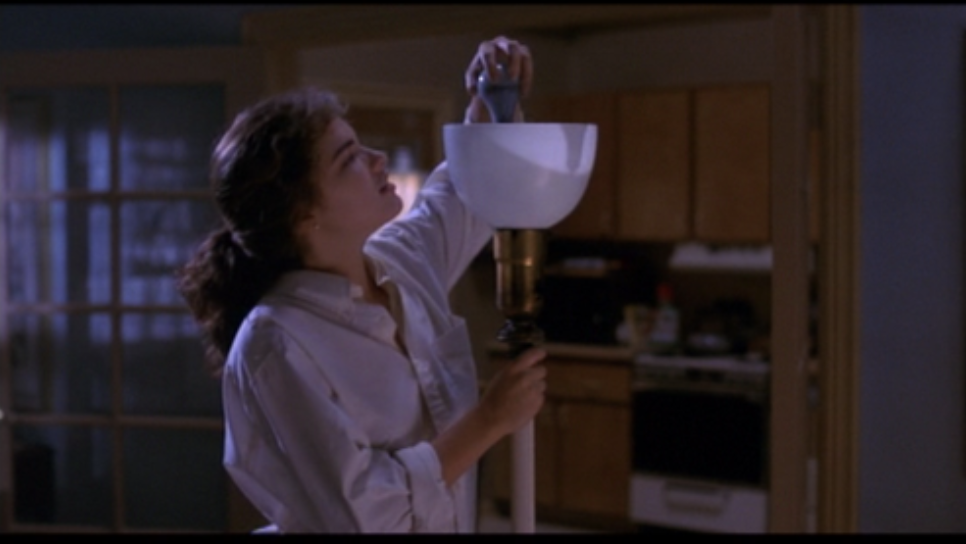 22/ And while on the subject of moving quickly, Nancy has mad skills when it comes to booby trapping an entire house in less than 20 minutes. You go (kick some Krueger ass), girl!

23/ If the home decor is any indication, Nancy’s mother has as much of a weakness for butterflies as she does for bottles of vodka. There are prints of butterflies in her bedroom, the living room, hell, even a butterfly attached to the inside of the bathroom’s medicine cabinet. 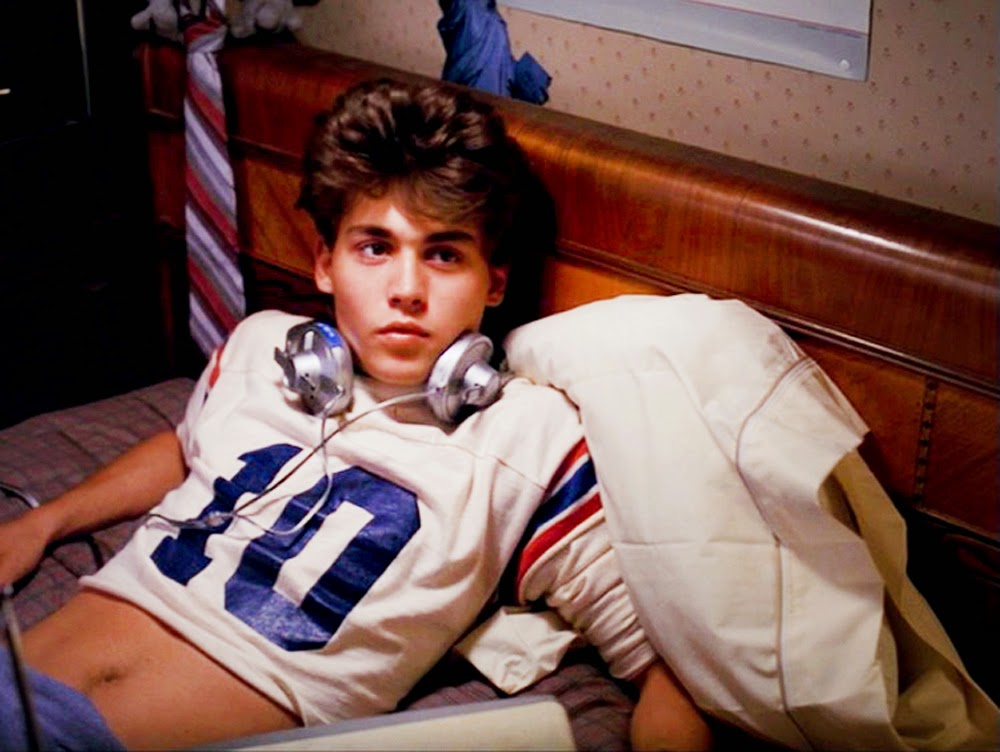 24/ And how adorable was Johnny Depp at the age of 21 in his acting debut? And like Jamie Lee Curtis in Halloween, he gets the coveted (and clearly a good career omen) “introducing” tag along with his initial screen credit.